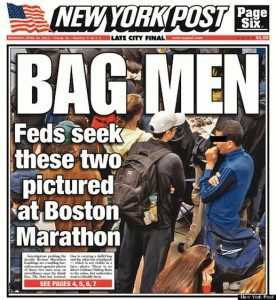 This was inevitable: The two people plastered on the front of the New York Post days after the Boston Marathon bombing under the headline “Bag Men” are suing the paper for libel and invasion of privacy. In a civil action filed in Massachusetts, the two accuse the newspaper of publishing “their photographic images, together with false, inflammatory and libelous assertions concerning plaintiffs’ involvement in the April 15, 2013 Boston Marathon bombing.”

The complaint identifies the plaintiffs as 16-year-old Salaheddin Barhoum and 24-year-old Yassine Zaimi, residents of Revere and Malden, Mass., respectively. As previously reported, the pair left the finish line area hours before the fatal blasts. “They had nothing whatsoever to do with the bombing,” reads the complaint. They learned of the bombings the way most Americans did — on television, that is.

Yet they were guilty of carrying duffel bags — and being photographed. Their images ended up online, subject to speculation by novice sleuths who seized on reports that the bombs were carried in backpacks or duffels. On Wednesday, April 17 — two days after the bombings — CNN, the Boston Globe and the Associated Press reported incorrectly that a suspect had either been arrested or taken into custody. Those faulty reports triggered a statement from the FBI saying this:

Contrary to widespread reporting, no arrest has been made in connection with the Boston Marathon attack. Over the past day and a half, there have been a number of press reports based on information from unofficial sources that has been inaccurate. Since these stories often have unintended consequences, we ask the media, particularly at this early stage of the investigation, to exercise caution and attempt to verify information through appropriate official channels before reporting.

After their images surfaced on the Web, both men went to local police and pleaded their innocence. They were both told that they were not suspects in the case.

The New York Post delivered a different impression. In its editions of Thursday, April 18, the newspaper carried the “Bag Men” presentation to America. Though the accompanying article carefully stated that investigators “are circulating photos of two men spotted chatting near the packed finish line,” the adjacency of that reporting with the photo and the tag “Bag Men” packed a condemnatory punch. In the words of the complaint:

The plaintiffs were not suspects and were not being sought by law enforcement. The Post had no basis whatsoever to suggest that they were, especially in light of a warning on Wednesday to the news media, by federal authorities, to exercise caution in reporting about this very matter. In fact, law enforcement authorities had then focused their investigation on two suspects who were not the plaintiffs.

The “Bag Men” package jolted the plaintiffs anew. The office manager at Zaimi’s place of employment brought the New York Post cover photograph to his attention, whereupon he “immediately started shaking, his mouth went dry, and he felt as though he was having a panic attack.” As for Barhoum, he found out about the story and cover photo around noon that day, when he returned from a track meet to find the media encircling his home. According to the complaint: “Barhoum observed reporters and other media members interrogating his parents with questions about their son, including questions about his being a Marathon bombing suspect and being sought by law enforcement authorities.” When he was shown the New York Post, Barhoum “became terrified, began to shake and sweat, and felt dizzy and nauseous.”

The complaint generally avoids bombast and sticks to a straight-up recitation of the facts in the case, which, as the Erik Wemple Blog has written before, should be plenty to prove that the New York Post acted negligently. Perhaps the shakiest contention in the document is the claim that the New York Post is “one of the most widely circulated and influential newspapers in the country.” Oh, and it misspells the name of the New York Post’s owner, “Rupert Murdock.”

More to come on this.