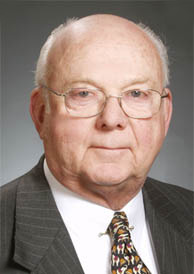 Charlie Barrett has practiced continuously at the firm since his graduation from law school in 1959, focusing on a spectrum of civil litigation matters including simple negligence, libel, premises liability, medical malpractice, and complex tort issues. Charlie has contributed generously of his time to professional associations and promotion of the highest standards of legal practice.  He has written and lectured on issues relating to trial practice and civil litigation and has testified as an expert witness on those and related topics. Charlie has practiced extensively and with great success at all trial and appellate levels.

Shortly after his graduation from Boston University School of Law, Charlie was hired by his alma mater to be the first instructor for its pilot indigent defense program.  The Voluntary Defender Program Charlie taught for two years was one of the earliest clinical programs in existence and courses like it are now offered at most law schools across the country.

One of Charlie’s most memorable cases involved his collaborative pro bono representation of a retired naval captain who alleged that he had been the victim of libel as a result of a book that purported to chronicle the events that occurred at Pearl Harbor.  Charlie and his co-counsel investigated the facts surrounding the sinking of the Battleship Oklahoma during the first twenty minutes of the United States’ involvement in World War II.  After years of depositions and legal maneuvering, Charlie and his co-counsel enjoyed a unique form of success—their client was given a letter from the author unequivocally stating that their client had acted honorably.